Overloaded with action and gore!

I was made aware of this movie through extensive media advertising, and I couldn't help but feel that the trailer made it seem this is going to be one of those scenarios where 'all the good parts were in the trailer'. After watching it I was pleasantly surprised and acceptable of the final product, with the fine balance of action, horror and drama.

I was especially drawn to the character of Boyce, the morally-righteous man injected into the 'ugliness' of war. Despite the fact that war only benefits the sturdy and aggressive soldiers, he continues to exhibit morality and a vulnerability to confront morally-wrong situations even if it compromises his position by enemy troops.

One such case is when their Sergeant gets caught by German soldiers he can't help but try to save him while the sturdy Wyatt resists him from doing so. This scene alone shows the differences in characteristics, making us question how morality can be defined in a different situation. Boyce is invested in overt morality which may compromise the operation, yet survives and continues to act morally, while Wyatt is more calculated and knows that the enemy cannot be reasoned with.

In the finale, Wyatt knowingly kills himself and the genetically mutated German general, Wafner, even though Boyce tries to prevent him from doing so. This implies the abstract view of morality between individuals, as if each person views it from a slightly different lens. If Boyce had prevented the 2 from dying, Wafner would be freed and the containment of his genetic mutation will be compromised, resulting in more civilian deaths.

Another extreme opposing natures of both these characters is explored in the scene where they hide at the rooftop when Wafner and his German soldiers visit the local, Chloe. Wafner's sexual advances on Chloe are enough to incite Boyce to intervene while Wyatt prevents him from doing so. This incites the common theme of preparedness for war, where the extremes of moral issues shouldn't be intervened if it means the teams' position is compromised. It may be said that doing so may cause even more casualties as the view of the enemy as an unhindered force of nature holds. This exploration of competing morals gives this movie fresh breath of air despite its heavy focus on adrenaline-filled action and a lesser extent of Horror.

The other significant theme that is explored is man versus nature in the sense that the strikingly fast rate of medicinal progression at an important time in human history is also seen negatively as it can be used in warfare. The idea that a certain drug can make everyday individuals into 'super-soldiers' is scary enough , but it is the loss of humanity in the process which is more terrifying as a viewer.

Wafner was quick to inject the 'incomplete' drug into himself, a sign of his faith that it will strengthen him so he can devastate his enemies. It is the same drive of servitude to one's country which ultimately makes Wyatt inject the same drug in order to subdue his super-powered enemy. In the end, it shows that both sides of the war are willing to de-humanise to an extent where the pride of victory is heavily prioritised.

The super-powered German 'zombies' were quite scary. I only wish they showed more of this, rather than exploring the battle of egos between Wyatt and Wafner. As such, this movie tended more towards action-packed war and the drama, when it should rather capitalise more on the horrors of mutations and explore the psychology of war.

In the end, Boyce's non-chalancy towards military training and preparedness makes him less likable that the more prepared Wyatt. Boyce's continued interjection into moral situations make him the ideal protagonist, but I can't help but dislike how his decisions may affect countless innocent lives.

The horror in this movie felt sublime as it was diluted by action and suspense. It seemed less like a horror movie and more like it belonged in the action genre. Nonetheless, it did well with the script provided. The only thing is, it didn't create an effect worthy to make it stand out among the annals of uniquely successful Horror movies.

On a more personal note, it is quite tiresome and frustrating to continue to see more and more movies with the common theme of the 'morally right Americans' and the 'morally wrong German' perspective. History cannot be undone, and so too can't filmmaking regarding historical events, but it would be more refreshing to see a more balanced and unique movie where such things aren't presented to such a degree.

At the end, it cant achieve the same level of success as Dead Snow did, due to more exposure to the zombies and balanced action. Nevertheless, this movie delivers adrenaline-filled action and intrigue to keep the audience engaged throughout the film. 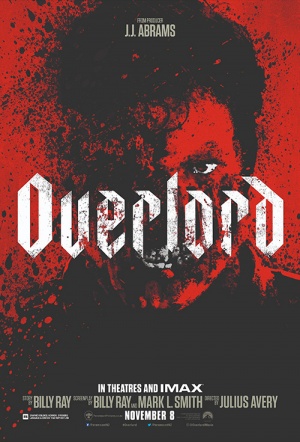