Oz: The Great and Powerful 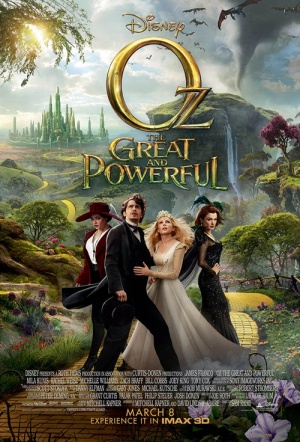 Sam Raimi (Spider-Man) imagines the origins of the Wizard of Oz in this prequel to the 1939 cinema classic. Stars Mila Kunis, Rachel Weisz, Michelle Williams, and James Franco as the morally dubious young magician destined to become Oz.

Oscar Diggs (Franco), a small-time circus magician and full-time heartbreaker, is hurled away from dusty Kansas to the vibrant Land of Oz. There he thinks he’s hit the jackpot when he meets the beautiful Theodora (Kunis), who is convinced Oscar's the great wizard prophesied to rule the kingdom. She introduces him to her sister Evanora (Weisz), who in turn shows him to the vast fortune that will be his - should he defeat the wicked witch plaguing the Land of Oz. Reluctantly drawn into the epic problems facing this fantastical world, Oscar puts his magical arts to use through illusion and transform himself into the great and powerful Oz.

Oz: The Great and Powerful / Reviews

This elaborate exercise in visual Baum-bast nonetheless gets some mileage out of its game performances, luscious production design and the unfettered enthusiasm director Sam Raimi brings to a thin, simplistic origin story.

A lavishly mounted re-telling that, for all its good intentions and visual wonders, can’t help seeming surplus to requirements.

You won't want to return to this Oz.

A miscast James Franco and a lack of charm and humor doom Sam Raimi's prequel to the 1939 Hollywood classic. Oz the Wimpy and Weak would be more like it.

Long-term Oz watchers will be enchanted and enthralled. There’s even a musical number, albeit an abbreviated one. Mila Kunis gets a gold star for excellence in bewitchery and Sam Raimi can settle securely behind the curtain as a mature master of illusion.

Oz: The Great and Powerful / Trailers