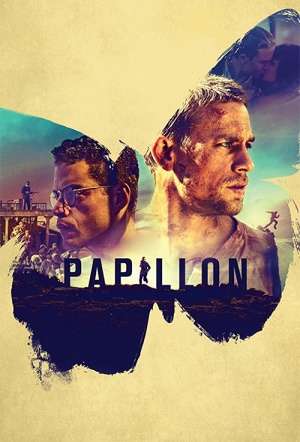 Charlie Hunnam (The Lost City of Z) and Rami Malek (Mr. Robot) star in this new adaptation of Henri Charrière’s memoir of his imprisonment and repeated escapes from the notorious penal colony of Devil’s Island.

"We first meet Charrière (Hunnam) cheerfully navigating the underworld of 1931 Paris. Charrière pisses off the wrong people, finds himself framed for murder, and is sentenced to serve his time in a feared, faraway, and inescapable jungle prison in St-Laurent-du-Maroni. En route, Charrière meets Louis Dega (Malek), a fellow convict with little of Charrière's brawn, but with lots of something else Charrière requires if he's to break out: money. Thus begins the story of an alliance that, as years of hard labour, punishing heat, and terms in solitary pass, becomes something like friendship." (Toronto International Film Festival)

What matters most is that the principally unchanged story of survival in colonial French Guiana remains a compelling one ...

While still heavily mirroring the other film's story beats, Danish director Michael Noer establishes his own rhythm. It's one of constant action and near-cartoonish brutality.

Working from a script by Aaron Guzikowski, the director Michael Noer generally puts the camera where it should go and adds a sterile Parisian interlude but nothing much else of note.

Hunnam and Malek both hold up their end of the deal. Noer, for his part, meets them halfway ...

... this brutal, bruising film never quite connects with its deeper themes, resulting in a story full of suffering but not enough transcendence.

Though Charlie Hunnam and Rami Malek give everything they've got to this true-life prison escape, they're denied the chance to make their characters as indelible as Steve McQueen and Dustin Hoffman did in the 1973 original.

There's no real voice in the storytelling, nothing distinctive about the imagery, if it's not a doubling up on the violence and gore, and the result doesn't remotely resonate in the same way.