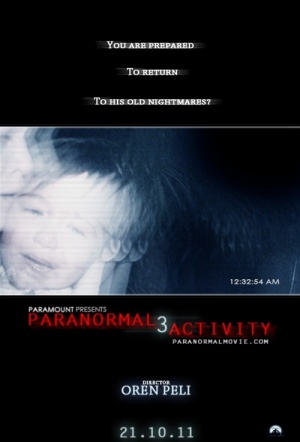 The third installment of the lo-fi supernatural horror series, a prequel set in the '80s, 18 years earlier than the spooky events depicted in PA 1 and PA 2. From the directors of Catfish.

Follows series protagonists Katie and Kristi as young girls and how they first came to be terrorised by the oft-mentioned - but so far unseen - demon. All told via their trusty, ever recording, handycam.

The first Paranormal Activity (2007) was an independent production (directed by Steven Schnieder and Jason Blum, who serve as producers here) made for $US 15,000 and acquired by Paramount Pictures. It went on to become one of the most profitable films in history, pulling in nearly $US 200 million worldwide.

Paranormal Activity 3 earns points for its low-key ability to keep viewers primed over long stretches to expect that something very bad, or even worse, may happen at any moment.