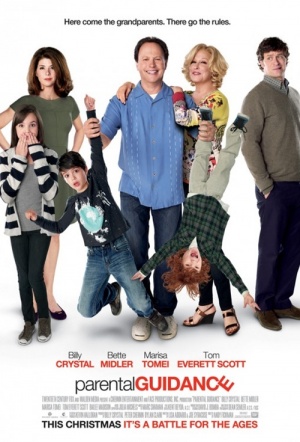 Billy Crystal and Bette Midler are forced to mind his three unruly grandkids for an entire week in this family comedy. Also stars Marisa Tomei.

Old school grandfather Artie (Crystal), who is accustomed to calling the shots, meets his match when he and his eager-to-please wife Diane (Midler) agree to babysit their three grandkids when their type-A helicopter parents (Tomei, Scott) go away for work. But when 21st century problems collide with Artie and Diane’s old school methods of tough rules, lots of love and old-fashioned games, it’s learning to bend – and not holding your ground – that binds a family together.

The better moments (mostly of the schmaltzy variety) are more than offset by the irritating and tedious ones.

There are smiles and tears, love and affirmations, a few funny jokes and a lot of easy sentimentality.

Deeply, willfully out of touch...

It might as well be called AARP Presents: Billy Crystal Is Old, And What's Going On With All The Facebooking And Twittering And iPods?