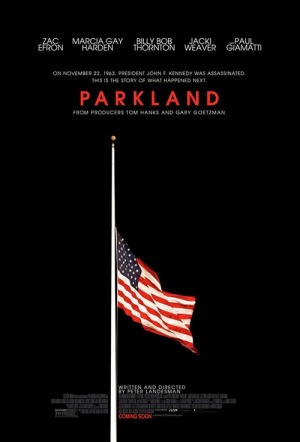 Anatomy of the assassination of President John F. Kennedy following - in real time - the immediate fallout as experienced by the young doctors and nurses at Parkland Hospital who treated him; the Secret Service and FBI; the unwitting cameraman who captured it on film; and Vice President Lyndon Johnson, who had to take control of the country at a moment's notice. Stars Zac Efron, Marcia Gay Harden, Billy Bob Thornton and Paul Giamatti. Co-produced by Tom Hanks, this is the feature debut from writer/director Peter Landesman.

An inadvertently tacky restaging of events.

The tone never stops waffling... What we're left with is the Disney theme-park version of history-all waxworks and weepiness.

You're left wondering why it was made.

If the film finally doesn't tell us anything we did not already know, the approach makes a worn-out old tragedy feel supple and urgent.

Finds a new angle on an exhaustively chronicled and debated subject.

The film is otherwise engrossing, quietly revelatory, and often profoundly moving as it retells a story we only thought we knew.