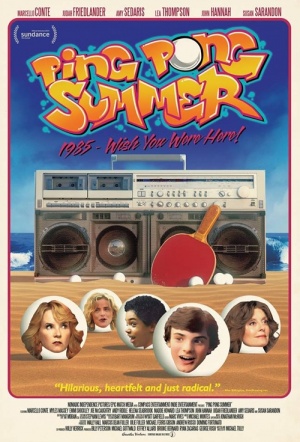 Nostalgia-hugging coming-of-age comedy set in the American summer of 1985 about a shy 13-year-old named Rad Miracle. During an annual family beach getaway, Rad makes a friend who shares his love for hip hop and ping pong, experiences his first crush and runs into the local bullies who challenge his pong skills. With the help of his elusive next-door neighbour (Susan Sarandon), Rad looks to overcome his timid and awkward struggles…

"Ping Pong Summer is about that time in your life when you're treated like an alien by everyone around you, even though you know—deep down—you're as funky fresh as it gets. Writer/director Michael Tully creates the ultimate love letter to the 1980s coming-of-age comedy with this vivid cinematic time capsule... a high five to the 13-year-old inside all of us who is hoping to come out on top." (Sundance Film Festival)

Achieves a winning innocence of spirit in which performances and production design are all perfectly synched to his low-key comic vision.

There are retro touches that children of the '80s will smile at (remember smelling the liner notes of cassettes?). But ultimately, those are too few and far between.

It's gawky and awkward, but just like Rad's breakdancing worm, this one gets better as it goes along.

A ho-hum memory piece that could have used a bit more objectivity, not to mention depth and energy.

Rose-tinted as the film's perspective may be, [this is] still a lingering, entertaining glance back at an era that Americans just can't seem to get enough of.