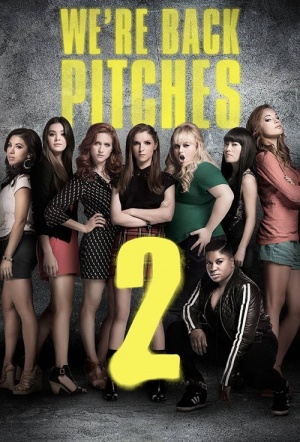 The all-girl A cappella college comedy is back, starring Anna Kendrick and Rebel Wilson once again. After a humiliating performance, The Bellas take their talents to an international competition that no American team has ever won. Elizabeth Banks, who co-produced the first film and co-stars in this sequel, makes her directorial feature debut.

It’s a good sign when a film has you crying with laughter three minutes in. Thanks to an opening gambit involving Miley Cyrus’ ‘Wrecking Ball’ and some stern looks from Michelle and Barack Obama, Pitch Perfect 2 starts on a high note and never goes off key.

Banks makes a credible directing debut with a riotous, even more female-driven sequel to the 2012 hit.

As this overlong, lacklustre sequel demonstrates, a souffle can only rise once.

As with Pitch Perfect, the actresses are the film's real charm, alongside those show-stopper a capella sequences, choreographed again by Aakomon Jones.

Reprising the kind of musical performances, campus hijinks, stinging humor and sassy sisterhood put in place by its eminently likeable predecessor... remixes the elements and comes up with something even slicker and sharper.

Sticks pretty close to the formula of its predecessor, but it's saved by its sly humour, with digs flying thick and fast.