Poi E: The Story of Our Song 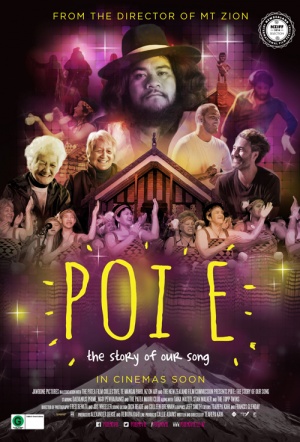 From director Tearepa Kahi (Mt. Zion), this documentary tells the story of iconic, chart-topping, Kiwi song Poi E by the Patea Māori Club. Conceived by Dalvanius Prime and brought to life by residents of Patea, hit hard by the economic tribulations of the Muldoon era, Poi E captured, and changed, New Zealand culture.

Says Kahi, "In those times, it was the English songs that were known, but this Māori song prevailed and made it to the top, because of the beauty and pride we have for our language... The world we live in today was in some sense paved by Dalvanius. The iwi Māori radio stations, Māori Television are all results of his hard work."

Poi E: The Story of Our Song / Reviews

To call this film a crowd-pleaser is an understatement (‘pleased’ is how the Queen feels when she receives a cup of Earl Grey at the right temperature). The crowd at the Civic during opening night of the New Zealand International Film Festival was electrified by Tearepa Kahi’s cinematic celebration of our song that – wisely – becomes a celebration of our language as well.

Will leave you tapping your toes, laughing at all the 80s fashions and culture, and smiling all the way home.

You'll laugh, you'll possibly cry, yes you'll get that damn tune stuck in your head for days. But you may even learn some of its lyrics other than that chorus. It'll be worth it.

They call it a feel-good movie, but it's more than that. People laughed, cried, cheered, and even sang along...

Disarming and charming, hilarious and moving... And above all, 100 percent Kiwi.

A wonderful celebration of creativity, resilience and, above all, identity.