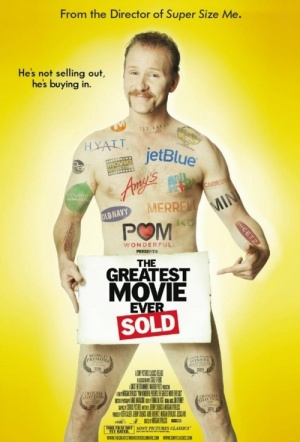 Morgan Spurlock (Super Size Me) takes on the billion dollar business of product placement in Hollywood.

"The man who risked cardiovascular meltdown to illustrate the perils of a trip to McDonald’s now risks being iced as a total sell-out for his ingenious assault on the billion-dollar business of product placement. As its title surely warns, Morgan Spurlock’s documentary is the most riotously upfront assemblage of mismatched brand endorsements you’re likely to encounter outside morning television. (Anyone for Mane ‘n Tail, the horse-human crossover shampoo?) When the fearless documentarian isn’t glugging POM Wonderful, applying Ban deodorant or flying JetBlue, he’s revelling in the meetings, the brand consultations, the pitches and the deals that enabled him to entirely fund his exposé of product placement from product placements." (Source: NZ International Film Festival 2011)

A consistently amusing and not entirely vacuous stunt.

Even more amusing than "Super Size Me," the documentary that put Mr. Spurlock on the moviemaking map in 2004.

The movie is quick and cheerful, and Spurlock is engaging.

Is he selling secrets or selling out?

Spurlock creates a good time along with some surprisingly salient observations as he tries to keep his balance on this very slippery slope.

So don't tell Spurlock he can't have his cake and eat it too. In Greatest Movie, he gleefully accepts his sponsorships on camera just to show you how wrong this all is.

The results are scattershot but entertaining, and occasionally eye-opening.