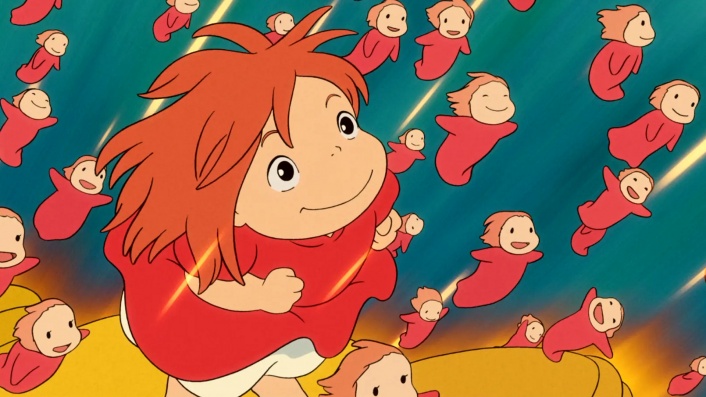 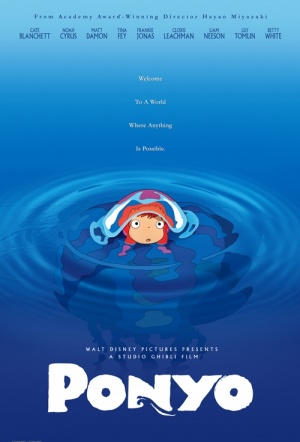 The living legend of family orientated anime, Hayao Miyazaki (Spirited Away, Howl's Moving Castle) returns to our screens on the back of rave reviews at the Venice Film Festival. Based on Miyazaki's observations of his own five year old son, the film tells the story of Ponyo, a young boy who develops a friendship with a goldfish princess who dreams of becoming human. It takes inspiration from Hans Christian Andersen's The Little Mermaid. Miyazaki says it's his "response to the afflictions and uncertainty of our times." The animation used is a pastel/water coloured style aesthetic, a style being attempted for the first time.

Ponyo (pronounced 'Po-Nyo') is a bright red piscine princess. After running - well, swimming - away from home, she becomes stranded on a beach and meets five-year-old boy Sosuke. He lives in a house on a cliff in a magical world inspired by a town in the real life Setonaikai National Park in Japan. Ponyo's father has her brought home by the wave demons, but she yearns to become human so she can be with Sosuke and live happily, if a little oddly, ever after.

Though targeted at tots, Ponyo may appeal most to jaded adults thirsty for wondrous beauty and unpackaged innocence

The latest masterwork from Hayao Miyazaki, places emphasis on the natural world, its tumults and fragility.

There is a word to describe Ponyo, and that word is magical. This poetic, visually breathtaking work by the greatest of all animators has such deep charm that adults and children will both be touched.

Revered director Miyazaki Hayao has long mastered the knack of appealing to all ages. Here he pulls off the more challenging feat of leading us back to the slow-moving pleasures of childhood.

You'll be planning to see Ponyo twice before you've finished seeing it once. Five minutes into this magical film you'll be making lists of the individuals of every age you can expose to the very special mixture of fantasy and folklore, adventure and affection.

It is a work of great fantasy and charm that will delight children ages 3 to 100.