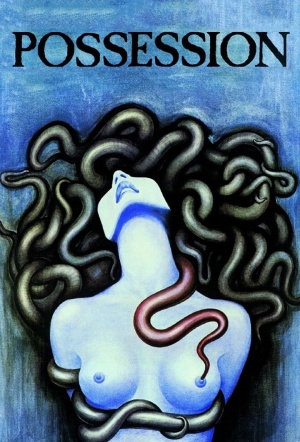 Andrzej Zulawski’s Possession is a psychotronic tour-de-force set during the Cold War in West Berlin. Follows a married couple, Anna (Isabelle Adjani) and Mark (Sam Neill), who are on the verge of divorce. Mark, a spy, returns from a mysterious work trip to discover Anna has been having an affair and neglecting their young son Bob.

Mark is forced to follow her in order to uncover the truth. What he discovers as the film launches into its unhinged Second Act spurs his descent into madness. Reality is distorted in this political allegory: an engrossing hybrid of science fiction, horror and marital drama.

Adjani’s incredibly unsettling performance is considered one of the finest cinematic depictions of hysteria. Shot on location in the urban locales of a divided Berlin, Zulawski exploits the existing Fascist architecture and desolate landscapes with an immaculate compositional eye for implied menace. This contrasts with Anna and Mark’s Neubau apartment which visually charts the dissolution of a marriage, rendering domesticity as an act of violence.