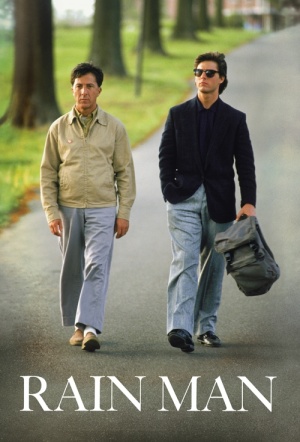 When their wealthy dad dies, Charlie is furious to be left only the family's prize roses and car whereas Raymond gets $3 million. So Charlie heads to Cincinnati and "borrows" Raymond - a brother he never knew he had - from the institution where he lives, hoping to use him as leverage to claim half the fortune.

Rain Man was a project championed by Hoffman and was famously turned down by a handful of big name directors including Sydney Pollack and Steven Spielberg.

One of the year's most intriguing film premises is given uneven, slightly off-target treatment in UA's Rain Man.

Of course, it's annoying. But it's also funny, touching and true, striking chords without ever reducing Raymond to a performing puppy. Definitely.

Its end effect depends largely on one's susceptibility to the sight of an actor acting nonstop and extremely well, but to no particularly urgent dramatic purpose.

So fascinating because it refuses to supply those questions with sentimental but unrealistic answers.

Hoffman and Cruise give signature performances in this thoughtful, and hugely enjoyable, classic.