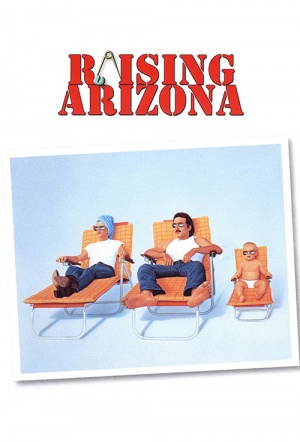 In this early Coen brothers film, Nicholas Cage and Holly Hunter play a childless couple who decide to help themselves to one of another family's quintuplets.

In the Coen brothers' second feature, an ex-con (Cage) and an ex-cop (Hunter) meet, marry and long for a child of their own. When it is discovered that Edwina (Hunter) is infertile they resort to snatching a baby. The couple tries to keep their crime a secret but soon friends, co-workers and a bounty hunter (Randall "Tex" Cobb) look to use the child for their own purposes.

While [the] film is filled with many splendid touches and plenty of yocks, it often doesn't hold together as a coherent story.

Starting from a point of delirious excess, the film leaps into dark and virtually uncharted territory to soar like a comet.

Like Blood Simple, it's full of technical expertise but has no life of its own.

What we have here is a film shot down by its own forced and mannered style.

The astonishing thing about "Raising Arizona" is how it can move so fast, be so loud and remain so relentlessly boring at the same time.

Hilarious, madcap comedy from the Coen brothers that demonstrates just why they are the kings of quirk.