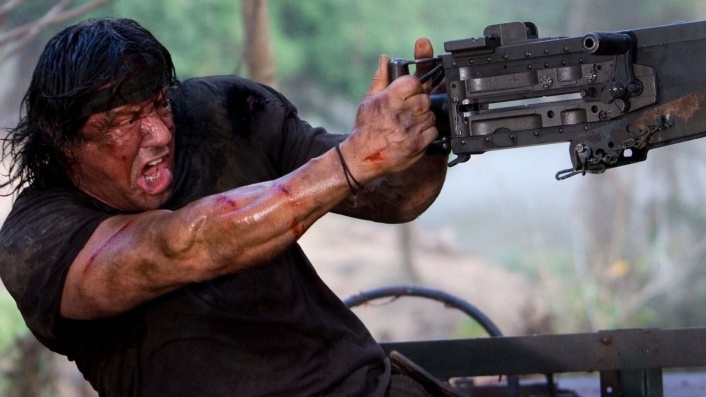 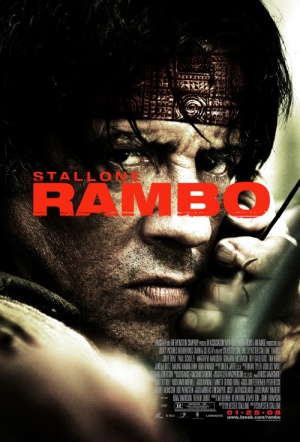 Steroid-smuggler Sylvester Stallone brings his iconic John Rambo character back to the silver screen! 20 years after we left him, Rambo has decided to live the quiet life, running a longboat on the Salween River in northern Thailand. Rambo enjoys fishing and catching snakes, calmly ignoring the civil war that rages on the nearby Burmese border.

But then, two weeks after taking some human rights missionaries up the river, he finds out that they've been captured and held hostage. When a priest comes to him asking for help, John Rambo, super-soldier, knows what he must do...
2008Rating: R18, Contains Graphic Violence & Offensive Language92 minsUSA
Action

Possibly the most violent movie ever. In the stuff of ready-made film-geek legend, the director of Rambo sat in a chair marked, in eBay-ready mission-statement, “John Rambo”.

Stallone (who looks fit but mostly keeps his shirt on) has no intention of bogging the action down, but it's still a notably cheerless exercise, without knowing winks or stabs (pardon the expression) at humor. It is in all respects, rather, a completely workmanlike effort.

The movie does have its own kind of blockheaded poetry.

Rambo is surprisingly effective as an action movie precisely because the villains seem truly dangerous and the "mission" truly a death wish.

Rambo films are, after all, about entertainment and body count and rather than dwelling on the plight of the Burmese people he prefers to set about shocking us into a numb state with as much over-the-top, gruesome and gratuitous violence as he can muster.

Rambo is not what you’d generally call a ‘good movie’, but it is a ridiculously excessive exercise in cinematic brutality which goes way, way further than any fan could have hoped for. As far as no-brainer action flicks go, this is about as good as it gets folks.

Rambo could have been a satisfying romp - wherein bad dialogue and cardboard characters can be forgiven - but for the sin of making the main man step to the sidelines in favour of charisma-free fillers. Bad move, Sly...

The film is shamelessly exploitative and manipulative in how it attempts to manoeuvre the audience to join in this celebration of violence.