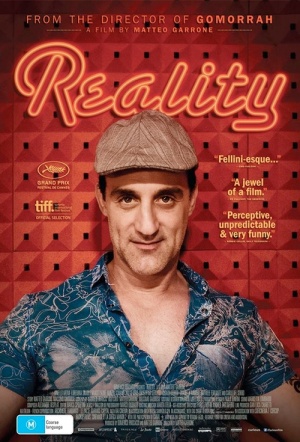 Luciano is a Neapolitan fishmonger led down a rabbit hole of skewed perceptions and paranoia after a sudden obsession with being a contestant on a reality TV show takes over his life. This reality-TV satire won the Grand Prix (effectively second place) at Cannes 2012. From the director of excellent Italian mafia drama Gomorrah.

Luciano's post-audition confidence becomes over-confidence, then outright paranoia sets in when he begins to think that anyone he doesn't recognise is part of a surveillance plan by the producers. Certain he's earned a place on the show and is being constantly monitored, Luciano begins to perform as if he is on reality television even though it would seem that he is, in fact, not.

Reality-TV addiction is overripe for satire, yet Matteo Garrone's latest swerves from anything biting, opting for an affectionate look at a man's mad quest for celebrity.

The film belongs to Arena, outstanding as a man growing ever more delusional in his quest to acquire celebrity status.

Mr. Garrone offers a glimpse not only of one man, but also of the soul of a people.

It's a likable film played with gusto and heart - though fundamentally a little sentimental and predictable.

As a satire on the seduction by media and our infatuation with celebrity, it's hardly The Truman Show, but Garrone's Gomorrah follow-up is wry and witty. Plenty of fun.

While its barbs on celebrity and reality television are expected and a little facile, they're mostly a misdirect for a story about family, community, and religion...