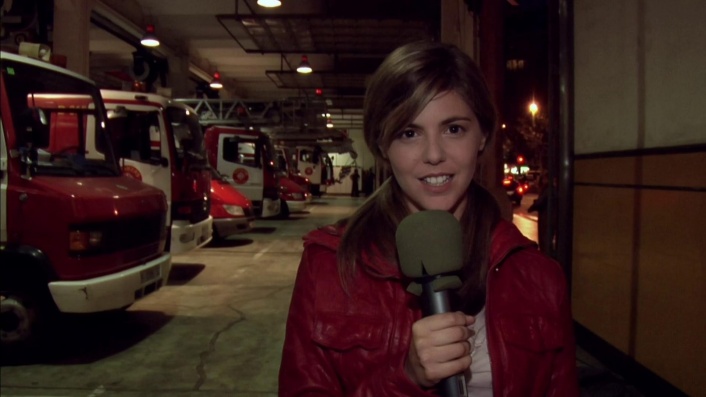 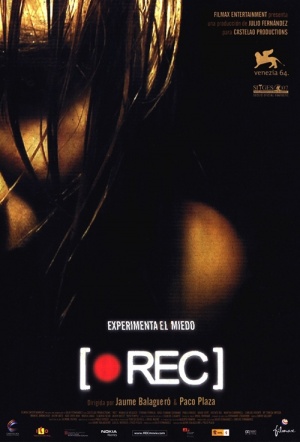 Spanish, 'found-footage' zombie-thriller. A camera crew and emergency workers find themselves locked in an apartment building on the cusp of a terrifying zombie outbreak...

"Ever since The Blair Witch Project, the faux horror documentary has had many imitators, culminating with the big-budget Cloverfield. Unfortunately all these imitators failed to do the one thing demanded of the new genre: scare the hell out of us. We're happy to report that [REC] makes up for prior transgressions with the story of perky TV reporter Angela, whose show While You Sleep covers the nocturnal activities of Barcelona firemen. When a report of a screaming woman in an apartment block comes in, Angela and her crew of two follow the dedicated team to the emergency. Festival audiences have been screaming at characters during the last five minutes 'PLEASE DON'T GO THERE!'". (Incredibly Strange Festival 08)

There are no delusions of grandeur here; [REC] knows it's nothing more than a simple genre film. Instead of resulting in lazy, derivative filmmaking, this has allowed the creators to focus on conjuring and almost flawlessly executing moments of genuine terror. Even the most predictable events have you gripping the armrests in white knuckled fear. There is the odd fresh concept introduced to the mockumentary template, but those are just garnishes for the scares that keep the story unfolding at a rollicking rate. The narrative is simple and straightforward, but the pacing allows this to be an asset rather than a detriment.

Co-helmers Jaume Balaguero and Paco Plaza rely entirely on the stale gimmick of filtering action through a video lens. Lazily scripted, without even a pretense of character development or psychological depth, it offers nothing new for genre fans.

The film corners you with the ferocity of a Spanish inquisitor with a branding iron and holds you there to the bitter end.

The violence is certainly creepy, with the zombies lurking in shadows and attacking with a ferocity not seen in Robert Rodriguez's recent big budget "grindhouse" effort, Planet Terror.

Even thought it's the third such effort to employ handheld camera in a zombie flick, this has more than enough shocks to hold its own.

A runaway rollercoaster of a fright flick, [Rec]'s strength lies in how well it sets up its over-familiar zombie meltdown