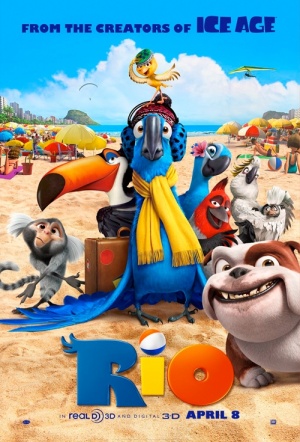 Animated family flick - from the makers of Ice Age and Horton Hears A Who - about a nerdy macaw bird from small-town Minnesota, named Blu (Jesse Eisenberg, The Social Network), who takes off on an adventure to the rainforests of Rio de Janeiro.

Blu (Jesse Eisenberg, The Social Network) thinks he is the last of his kind. So when he discovers there's another - and that she's a she - he breaks out of his cage and heads to Brazil to find her. But it's far from love at first sight between the domesticated and flight-challenged Blu and the fiercely independent, high-flying female, Jewel (Anne Hathaway). Also features the voice talents of Flight of the Conchords' Jemaine Clement and Jamie Foxx.

Like its flight-challenged parrot protagonist, Rio takes a while to get off the ground but manages to soar by the end.

With a story which is sweet but not cloying, Rio manages to move and amuse in equal measures.

This animated feature effort is a significant step forward from the studio's "Ice Age" films, in the richness of its cast, the exuberance of its music and the vibrance of its palette.

Voice work across the board is top-notch, with the Black Eyed Peas' will.i.am and Jamie Foxx adding sass to their smooth-talking bird buddies, and comic George Lopez solid as a party-loving toucan named Rafael.

Okay, so it's not exactly a groundbreaking advance from the team behind "Ice Age," but with its kaleidoscope of colour and heaps of humour, you'll be charmed.

Rio hasn't got the wit or charm of Ice Age, though it is probably at least the equal of one of that great film's lesser sequels.