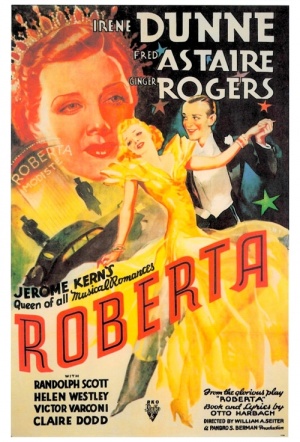 Fred Astaire and Ginger Rogers musical, based on the Broadway musical (itself adapted from Alice Duer Miller's novel Gowns). The famous Astaire/Rogers duo (in their third film together) take secondary roles to leads Irene Dunne and Randolph Scott.

Dunne plays a Parisian couturier, the partner of "Roberta" (Helen Westley), who passes away, leaving her half of their chic business to football player Randolph Scott - who knows and cares little for high fashion. Astaire is bandleader Huck, Rogers rounds out the cast as a phony Polish countess who happens to be Astaire's former girlfriend. Songs written for the stage production were retained for the film version, including Lovely to Look At and Smoke Gets in Your Eyes. Keep an eye out for a blond Lucille Ball as a fashion model. The film is now in the public domain.