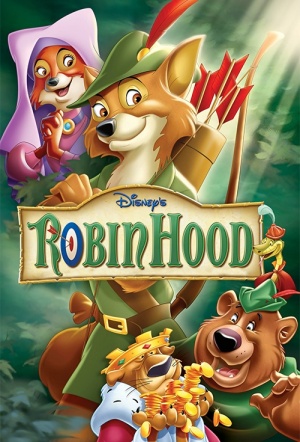 Animated Disney retelling of the classic story of Robin Hood but with the characters portrayed as animals. Stars Brian Bedford and Phil Harris.

A friendly rooster called Alan-a-Dale (Roger Miller) tells stories and sings songs of the heroic Robin Hood (Bedford) and his trusty sidekick, Little John (Harris). When evil Prince John (Peter Ustinov) commands the Sheriff of Nottingham (Pat Buttram) to collect unreasonable taxes from the animals of Sherwood Forest, Robin, Little John and the other merry men wage a lighthearted battle against their enemies.

No one makes cultural appropriation as much fun as Walt Disney.

Even at its best, Robin Hood is only mildly diverting.

The visual style is charmingly conventional, as gently reassuring as that of a Donald Duck cartoon, sometimes as romantically pretty as an old Silly Symphony.

Foxes with bows and arrows. What could be better than that?

What sinks this one is the utter lack of the childhood insight and sympathy that really give the Disney films their staying power.