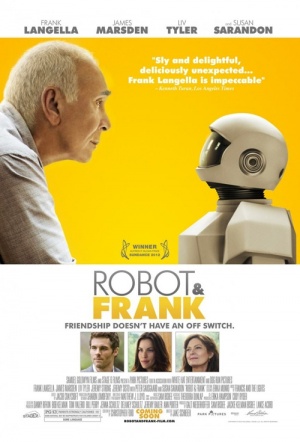 Frank Langella (Frost/Nixon) stars in this near-future comedy-drama about a retired cat burglar who gets back into the game with the help of nursing robot - a gift from his son.

"Curmudgeonly old Frank lives by himself. His routine involves daily visits to his local library, where he has a twinkle in his eye for the librarian (Susan Sarandon). His grown children (Liv Tyler and James Marsden) are concerned about their father’s well-being and buy him a caretaker robot. Initially resistant to the idea, Frank soon appreciates the benefits of robotic support - like nutritious meals and a clean house - and eventually begins to treat his robot like a true companion. With his robot’s assistance, Frank’s passion for his old, unlawful profession is reignited, for better or worse... a story about family and the implications of humankind’s ever-changing relationship with technology." (Sundance Film Festival)

Frank Langella plays so many variations on cute and crotchety and with such suppleness - he's by turns a charming codger, a silver fox and a wise graybeard - that his performance comes close to a saving grace.

This is a framework that could have benefitted from more irony and complexity, especially with the resources of Langella, but at the end, I felt the movie was too easily satisfied.

'Robot & Frank' reminds quirk-hardened veterans that an odd premise and big heart don't have to add up to too-precious awards bait.

The film is light-fingered and charming.

Schreier elicits warm performances from Langella and Susan Sarandon, and even from his robot (voiced by Peter Sarsgaard).