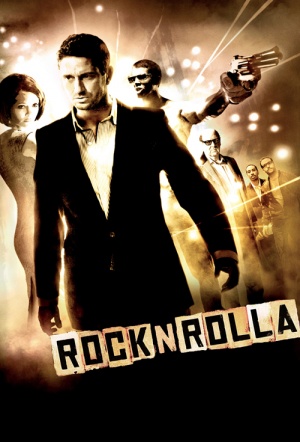 Guy Ritchie's latest film is familiar territory for the master of the cockney underworld. This story of sex, thugs and rock 'n roll stars Tom Wilkinson as Lenny Cole, the old school crime boss dealing with an emerging new wave of criminals, at a time when real estate has supplanted drugs as the biggest market.

After a botched real estate scam, One Two (Butler) and Mumbles (Elba) steal the money they need to pay back Cole, with the help of accountant Stella (Newton). But their plans are complicated by shady Russian billionaire Uri Obomavich and a valuable painting. Soon enough, gangsters, junkies, opportunists and even a dead rock star are coming out of the woodwork for a shot at the cash. Also stars Jeremy 'Ari Gold' Piven, Ludacris, and new Bond girl Gemma Arterton.

It may just be lightweight popcorn entertainment for grown ups, but RocknRolla knows it and uses that status as an excuse to have as much fun as it can. Its all style over substance, but you'll leave smiling.

Like the filmmaking itself, the violence has no passion, no oomph, no sense of real or even feigned purpose.

RocknRolla attempts to depict a world of ever-expanding chaos. But the chaos is only in the way the story is told. The actual vision Ritchie offers is pedestrian and tame.

RocknRolla is a kickass crime drama that just doesn't know to quit while it's ahead.

It's all here: the ingenious, obscenity-laced language, the double crosses that turn into triple crosses, the swaggering characters so in love with themselves. GottaLove RocknRolla!

If you're a fan of the early Ritchie comedy-crime thrillers, then this is not only right up your alley, it's a long lost relative returning home.

A kinetic, funny, well-cast crime caper, RocknRolla proves Ritchie is still the lord of his manor - if not exactly Shakespeare.