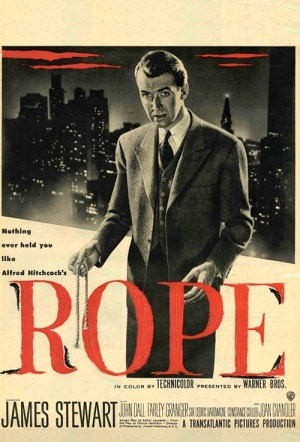 Brandon (Dall) and Philip (Granger) gloat about their intellectual superiority. As an exercise to this proposition, they strangle their “inferior” friend to death with a thick piece of rope. They dump this body in a large chest in their apartment and invite the victim’s family and friends over for dinner as a twisted celebration/challenge of their accomplishment. However, their old schoolteacher Rupert (Stewart) begins to grow suspicious.

The movie is comprised of only 10 shots and was Hitchcock’s first feature film in colour.

Hitchcock could have chosen a more entertaining subject with which to use the arresting camera and staging technique displayed in Rope.

In turning [the play] it into a movie for mass distribution, much of the edge [is] blunted.

The unpunctuated flow of image becomes quite monotonous.

Remains one of the most interesting experiments ever attempted by a major director working with big box-office names, and it's worth seeing.