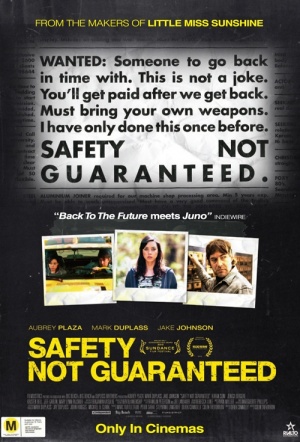 Develops into an endearingly scrappy and romantic romp that serves up some nice soul-searching moments alongside a steady stream of laughs.

It's equally endearing as a sweetly funny romance between two likable oddballs and as a low-tech time-travel thriller, and has something profound to say about making the most of the present.

'Safety Not Guaranteed' doesn't quite know what kind of comedy it wants to be; the humor works best in its first hour, when the news-of-the-weird plot takes on a suggestive dimension of romantic desperation.

Director Colin Trevorrow and writer Derek Connolly keep the film humming with funny and touching surprises. And Plaza is a flat-out enchantress.

'Safety Not Guaranteed' not only has dialogue that's about something, but characters who have some depth and dimension.

Aubrey Plaza proves she can carry a film with this multiplex-friendly comedy about time travel.