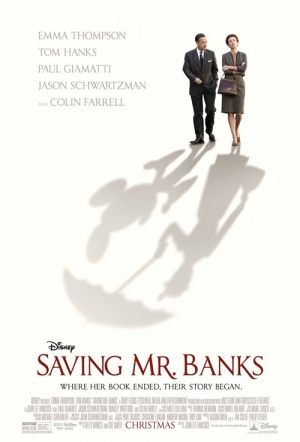 Feel-good biopic dramedy about Walt Disney's (Tom Hanks) 20-year pursuit of the film rights to British author P.L. Travers' (Emma Thompson) novel Mary Poppins. Travers visits California in 1961, but Disney struggles to convince her of his screen vision and to crack her prim exterior. From the director of The Blind Side, co-starring Colin Farrell, Paul Giamatti and Jason Schwartzman.

P.L Travers reflects on her childhood in 1906 Australia, a trying time for her family which not only molded her aspirations to write but one that also inspired the characters in her beloved 1934 book. None more so than the her caring father (Farrell), a tormented banker who, before his untimely death that same year, instills the youngster with both affection and enlightenment (and would be the muse for the story’s patriarch, Mr. Banks, the character that the famous nanny comes to aid). While reluctant to grant Disney the rights, Travers comes to realise that the acclaimed storyteller has his own motives for wanting to make the film - which, like the author, hints at the relationship he shared with his own father.

“A spoonful of sugar makes the medicine go down” might have come from Mary Poppins but it’s a line that could also be applied to Walt Disney films in general. So it’s a welcome surprise to find that Saving Mr. Banks, with its sweeping soundtrack, emotional family backstory and Mickey Mouse motifs, is smart enough not to overdose on the sweet stuff.

Hanks takes to Walt like a pair of cosy slippers, but it's Thompson who adds layers to a classy but predictable slice of Disney schmaltz.

The whole thing goes down with a few bucketloads of sugar. What keeps it from becoming sticky schmaltz is Emma Thompson, who plays Travers with wit and warmth.

The best parts offer an embellished, tidied-up but nonetheless reasonably authentic glimpse of the Disney entertainment machine at work.

It would all seem horribly manipulative and distasteful if Saving Mr. Banks weren't buoyed by a strong sense of nostalgia and, yes, a good bit of Disney Magic(TM).

A delicate and brilliantly acted story of overcoming the past to embrace an uncertain future.