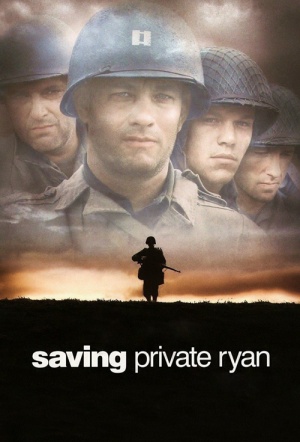 Beginning with the D-Day invasion, perhaps the most famous moment in the history of WWII, the story itself chooses to focus on the rescue of one man. This allows for reflection upon the nature of war on the individual as opposed to the jingoistic flag waving that swamps so many World War II films. To this end, the terror is amplified in several unforgettable sequences, most notably the opening landing scene on the beaches of Normandy. The soldier characters are both heroic and flawed, allowing for a genuine human element that few other war films achieve. The minor details are fantastic too, with historical production design that was lauded for its accuracy by veterans. Moreover, it is they who claim that this is the best war story in cinematic history.

Steven Spielberg's soberly magnificent new war film, the second such pinnacle in a career of magical versatility, has been made in the same spirit of urgent communication. It is the ultimate devastating letter home.

This film embodies ideas. After the immediate experience begins to fade, the implications remain and grow.

A startling reminder of exactly how spectacular a director Spielberg can be when he allows himself to be challenged by a subject (in this case World War II) that pushes against his limits.