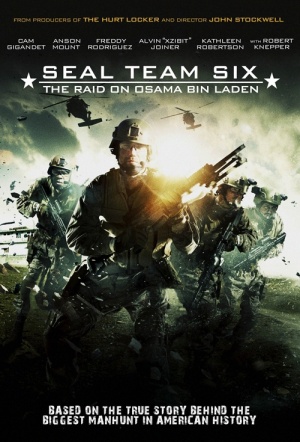 Action film account of the successful manhunt for Osama bin Laden in Pakistan, as undertaken by a U.S. Navy SEAL team. Follows the team members from their training to the daring nighttime raid on the bin Laden compound in Pakistan. Initially unaware that their target was the world's most wanted man, the team become aware that they are charged with the mission to eliminate America's most reviled enemy.

Rumours have it that producer Harvey Weinstein introduced scenes stressing President Obama's involvement in the mission. Denied by Weinstein, the topic caused controversy in the build up to the 2012 Presidential Elections. The facts portrayed in the film were not "confirmed or denied" by White House officials.

If you want a proficient, dramatized re-enactment of the May 1 - 2, 2011 mission to kill Osama bin Laden, Seal Team Six meets the bill

A pretty niftily put together platoon-movie, tautly directed by John Stockwell... provides a fairly clear, certainly a very exciting depiction of the raid as it went down.