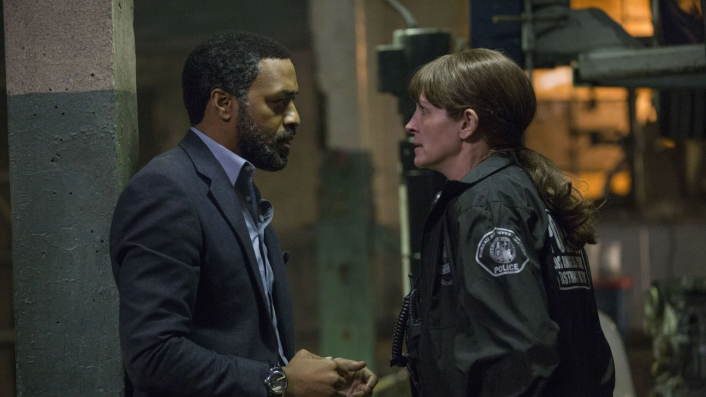 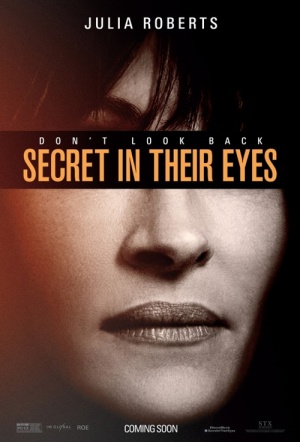 A tight-knit team of rising FBI investigators – Ray (Ejiofor) and Jess (Roberts), along with their District Attorney supervisor Claire (Kidman) – is suddenly torn apart when they discover that Jess’s teenage daughter has been brutally and inexplicably murdered.

Now, 13 years later, after obsessively searching every day for the elusive killer, Ray finally uncovers a new lead that he’s certain can permanently resolve the case, nail the vicious murderer, and bring long-desired closure to his team. No one is prepared, however, for the shocking, unspeakable secret that will reveal the enduring, destructive effects of personal vengeance on the human soul.

In 2009 an Argentinian film, The Secret In Their Eyes, won the Oscar for Foreign Language Feature Film. Hollywood in its infinite wisdom has remade that film for the English-speaking market otherwise known as those-who-won’t-read-subtitles. Unsurprisingly, they have chosen to release this film, starring three Oscar mainstays – Julia Roberts, Nicole Kidman and Chiwetel Ejiofor – at the start of Oscar season. For Secret In Their Eyes is nothing if not Oscar bait.

A clever but workmanlike Hollywood retooling...

Can we believe that police officers would let a psychopathic rapist and murderer go free in the name of fighting homegrown terrorism? As an allegory for human-rights abuses during the War on Terror, it's a non-starter.

What started out as a moody if by-the-book thriller becomes increasingly silly.

Feels more like syndicated television than a feature film.

The film is a reasonably tasty thriller that sets up a provocative premise, then fails to follow it through.

The emotional power comes from the writing and acting...

Secret in Their Eyes (2015) is available to stream in New Zealand now on Google Play and Apple TV and Academy On Demand.