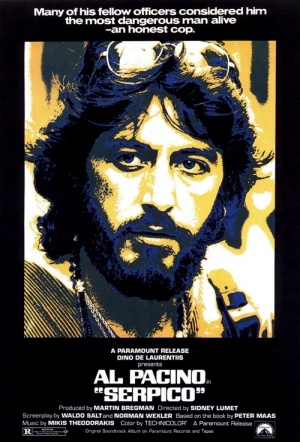 Al Pacino is police whistleblower Frank Serpico in this true New York drama from filmmaking legend Sidney Lumet. New to the force, Serpico keeps one foot firmly planted in the 1960s counterculture - sporting a beard and love beads and living in bohemian Greenwich Village. He’s also honest, and within a department quick to take a bribe he is quickly ostracised. Uncovering a shocking level of corruption, Serpico takes the potentially fatal step of breaking the blue wall of silence and going public with his exposé.

Pacino's bravura performance – nominated for an Oscar, winner of the Golden Globe - cemented his fast-rising reputation, launched a year earlier with The Godfather. The film is adapted from the Peter Maas’ book on Serpico and the Knapp Commission enquiry he instigated.