For those who enjoyed Martin McDonagh's excellent debut feature 'In Bruges', there's much to revel in the madness of such material in 'Seven Psychopaths' which unfortunately leads to more misses than hits.

Featuring a stellar cast headed by Colin Farrell, Sam Rockwell, Christopher Walken, Woody Harrelson and the indelible pair of Harry Dean Stanton and Tom Waits, there's much to like on paper. However, the uneven keel of the plot kinda registered a "meh" reaction.

Farrell (who provides better performances as a character actor rather than a leading man) plays an Irish screenwriter who can only muster a title for his screenplay - 'Seven Psychopaths'. However, his writer's block is cured with absolute wild inspiration by his actor friend (Rockwell, who is consistently great and hilarious as ever). The pair's inspired outrageous schemes accompanied by Walken lead them into trouble with ruthless and mean-spirited gangster (played with the usual Harrelson shtick).

There have been notable comparisons between the work of Quentin Tarantino and McDonagh's work here which are valid. However, McDonagh falls short of making his material come alive together seamlessly, something which Tarantino has mastered with elegance and purpose.

There's no doubt McDonagh loves his characters given their shameless and somewhat likeable appeal. However, McDonagh provides a misguided hand with his meta-fiction approach to his storytelling which is reflective of Farrell's character and his writer's block. There's a feeling of "lets throw everything against the wall and see what sticks" which yes, allows for some great performances from the cast. But ultimately that is all there is to like. 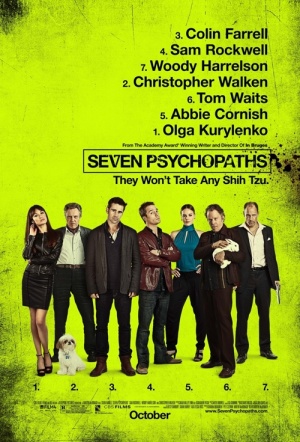