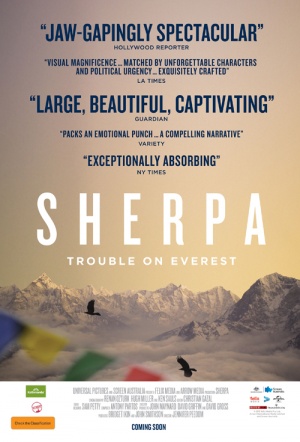 In 2013 a group of Western climbers and angry Sherpas allegedly got into a confrontation that made global headlines. This documentary explores the unequal relationship between cashed-up foreign expeditions and their guides, plus local tradition, as exemplified by Phurba Tashi Sherpa, an experienced climber.

Director Jennifer Peedom and her team set out to uncover the cause of this altercation, intending to film the 2014 climbing season from the Sherpas' point of view. Instead, they captured Everest's greatest tragedy, when a huge block of ice crashed down onto the climbing route, killing 16 Sherpas. For the Himalayan workers repeatedly traversing the mountain carrying supplies, the risk of this hazardous endeavor is multiplied.

If being at the right place at the right time can make or break a particular breed of documentary, the odds of coming away with the goods have got to be better atop Mt Everest than damn near anywhere else. In the case of Sherpa, with its focus on the Himalayan people who shlep expeditions’ gear up the mountain and are reliant on the income this provides, this setting can only aid a film that likely would have proved revealing even without the drama that the peak provides.

Packs a visual and emotional punch.

Should be a hugely impactful film with an emotional impact. Instead it falls short - not because of the content but due to the treatment.

Exposes the shockingly self-centred and entitled attitudes of some of the western climbers.

Stunningly photographed and brilliantly sly... it’s also a heartfelt tribute to the resilience of a people.

This moving study of Sherpa culture might be the most majestic-looking industrial dispute documentary ever made.

A documentary whose visual magnificence is more than matched by unforgettable characters and political urgency.

Towering... A gripping account of the worst day in Everest history and the Sherpas for whom it was the final straw.

Jennifer Peedom's film pulls no punches in exploring the culture and work of this unheralded group, as well as their frequent exploitation by Westerners.