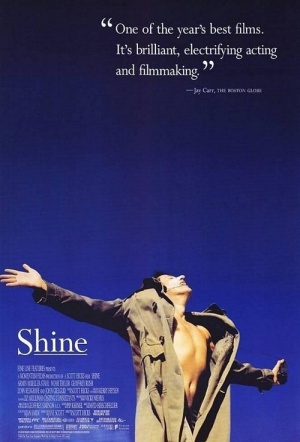 Award-winning biopic on Australian concert pianist David Helfgott who in his 20s, with an international career ahead of him, suffered a mental breakdown and would instead spent years in institutions. Helfgott is played by Geoffrey Rush who took the Oscar, BAFTA and Golden Globe for his performance in 1997.

Controversy stirred after the film became a huge success, and the real Helfgott embarked on musical tours. His playing was said to be less adroit than expected which sparked criticism that director Scott Hicks had exaggerated Helgott's talent for dramatic purposes.

Shine beams with warmth, sensitivity, and fine taste, but some of that illumination is the work of our own reflector lamps.

Few films leave a lasting expression as great as (Shine)...

Top-notch performances, including luminous contributions from Lynn Redgrave and John Gielgud and a powerful turn by Armin Mueller-Stahl, plus a strong, emotional narrative drive...

Films hitting that note of uplift rarely play it as powerfully or, finally, as tenderly as Shine.

His music floods out like a cry of anguish and hope.

Faultless performances from all the cast help deliver a film of humour and warmth.