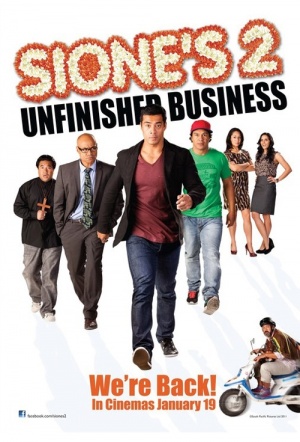 Sequel to the awesome Sione's Wedding (2006), picking up five years later with the Duckrockers dealing with marriage, parenthood, money and a missing Bolo (David Fane).

Albert (co-writer Oscar Kightley) and Tania (Madeleine Sami) are now happily married, but can't quiet seal the deal with a baby. Whilst Sefa (Shimpal Lelisi) and Leilani (Teuila Blakely) have got two kids, they aren't married despite Sefa's proposal. Stanley (Iaheto Ah Hi) is now a trainee Deacon in the Future Church, Michael (Robbie Magasiva) has moved to Australia, and Bolo ditched his job with Sefa’s failing business to work for Sione. As adulthood drives them apart, a crisis brings them back together: when Bolo disappears, the Minister (Nathaniel Lees) gathers up the boys to find him, somewhere, in the world’s largest Polynesian city - Auckalangi.

When it was released six years ago, Sione’s Wedding didn’t quite make the economic or cultural impact expected. One school of thought blames piracy for the former, but the latter is more readily explained by the film doing merely an average job at charting overly familiar comedic territory (albeit with a Polynesian Auckland twist). So what’s this ‘Unfinished Business’ referred to in the title of its sequel then? Upon seeing Sione’s 2, it’s hard to escape the conclusion that they’re talking about box office, rather than funny business.

An unfortunately flat, uneven and at times, unfunny affair.

Despite a somewhat darker plot, it retains the resolutely cheerful, upbeat tone of Sione the first.

Sure, it tries hard to move things on from the wedding-themed first movie but Unfinished Business lacks the spark and the smarts of Sione's Wedding. It's no honeymoon.

The odd flash of comic chemistry can still be detected in this uneven sequel.

This film is happy to chase a few cheap laughs.