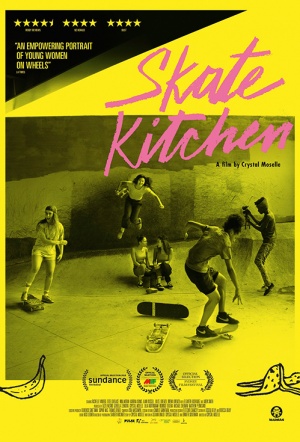 "Moselle recruited the film’s core cast after a chance encounter on a train – Skate Kitchen co-founder Rachelle Vinberg stars as Camille. The rest of the crew shine in their roles and lend true naturalism to the film, whether they’re out skating, getting high or dealing with drama. The girls make great company as they skate around town and talk about life and their troubles – with both their families and the male skate crews who dominate the best spots." (Sydney Film Festival)

Skate Kitchen has plenty to say about the lengths to which young women must go to clear out a little breathing room in testosterone-heavy spaces, but it is first and foremost an irresistible hangout movie.

... cool, fun tribute to a group of real-life skater teens.

Unlike the skaters - always magnetic when they ollie and rail - Moselle has only one move as a filmmaker: rhapsodic slo-mo and drony guitar rock on the soundtrack.

"Skate Kitchen" is unfailingly compassionate to, and genuinely appreciative of, the people it chronicles.

Skate Kitchen falters whenever it starts to act like a movie instead of the observational slice of life that Moselle's so adept at capturing.

As a snapshot of the way young people converge and interact, it is a fascinating, funny, warm experience, capturing the varied complexities of its young women in bold colours.

Less a coming-of-age film than a series of crucial episodes in that process, Skate Kitchen mixes dreaminess and disillusionment as it observes the choices Camille makes and the ensuing fallout.