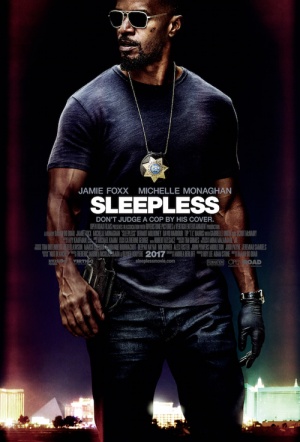 Academy Award-winner Jamie Foxx leads this Vegas-set remake of the 2011 French thriller Sleepless Night as an undercover cop who has one night to save his kidnapped son.

Undercover Las Vegas police officer Vincent Downs (Foxx) is caught in a high stakes web of corrupt cops and the mob-controlled casino underground. When a heist goes wrong, a crew of homicidal gangsters kidnaps Downs’ teenage son. In one sleepless night he must rescue his son, evade an internal affairs investigation and bring the kidnappers to justice.

Monaghan and Foxx, for all their gifts, can't transcend the material, though they do get more out of it than most others would be able to.

"Sleepless" is a propulsive thin exercise, "energetic" but tedious, the kind of January movie that Jamie Foxx should have permanently graduated from.

We get muttering and glowering from Mr. Foxx, a story that can't manage enough twists to tie a shoelace, and set pieces that have been done better in other movies.

At a certain point, Odar's intense atmospherics - amplified by the throbbing bass notes of Michael Kamm's heavy, percussive score - start to feel like the work of a filmmaker on genre autopilot.

Never rising above the level of generic B-movie, Sleepless represents the sort of disposable fare typically dropped into theatres in January.