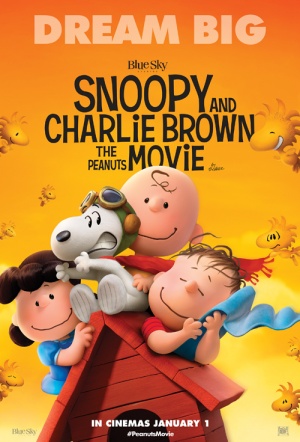 The characters of Charles M. Schulz's iconic and influential comic strip (which ran from 1950 to 2000) - Charlie Brown, Snoopy, Linus, Lucy et al - return to the big screen, animated by Blue Sky Studios (Horton Hears a Who!). Co-written by Schulz's son and grandson.

Nothing ever seems to go Charlie Brown’s way. Try as he might, he can’t seem to avoid messing up in front of Lucy, Linus, Franklin, Peppermint Patty, Marcie, Sally, Pig-Pen and the rest of the kids on the block. But when someone new arrived to the neighbourhood, a little red-haired girl, Charlie Brown sees his chance to re-invent himself in front of someone who DOESN’T think he’s a blockhead.

Turning classic cartoon properties into big-budget features has produced films ranging from ‘pretty good’ (Mr. Peabody and Sherman) to ‘kill-it-with-a-pitchfork horrible’ (Alvin and the Chipmunks). These films almost always favour contemporary CGI styles rather than traditional animation techniques, lest they get woefully overlooked like 2011’s Winnie the Pooh. But with The Peanuts Movie, Blue Sky Studios (Ice Age, Rio, Epic) does both by staying true to Charles M. Schulz’s designs while giving them a fresh coat of visual innovation.

A 'Peanuts' adaptation that his creator can be proud of.

A sweet, timid adventure that thinks inside the box.

It's a bit startling, and undeniably refreshing, to see a children's movie that ... is driven by the small anxieties a real child might experience on a daily basis.

Perfectly retains the look and the feel of the original strip. But it moves with just enough pace and energy to make the stories work for a modern attention span.

What a delight this is.

A delightful romp that captures the spirit of the adored 65-year-old comic strip.

It's slight, but sweet. How to Draw Snoopy