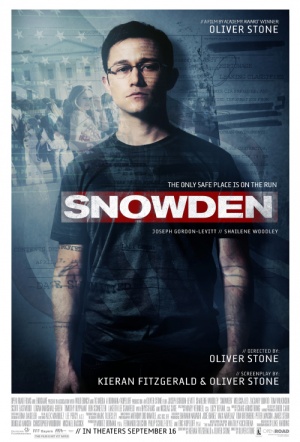 Joseph Gordon-Levitt (Looper) leads this biographical thriller from Oliver Stone as Edward Snowden, the former CIA employee who blew the whistle on mass surveillance and leaked thousands of classified documents to the press. Co-stars Shailene Woodley (Divergent) as his girlfriend Lindsay, Zachary Quinto (Star Trek Into Darkness) and Tom Wilkinson (The Best Exotic Marigold Hotel) as Guardian journalists Glenn Greenwald and Ewen MacAskill, and Melissa Leo (The Fighter) as Laura Poitras, the director that documented Snowden’s leak with her Academy Award-winning film Citizenfour.

Stone's exile in the desert of overheated irrelevance has now ended. "Snowden" isn't just the director's most exciting work since "Nixon" (1995) - it's the most important and galvanizing political drama by an American filmmaker in years.

There was always the chance of Snowden's story coming off as an underpowered Bourne movie, but Stone somehow finds ways to make it extra boring.

Mr. Stone has made an honourable and absorbing contribution to the imaginative record of our confusing times.

Stone has made a film aimed at breaking out Snowden's story to the masses but it's made with such limpness that a swift read of his Wikipedia page will prove far more exciting.

Joseph Gordon-Levitt is fiercely committed as Snowden, but director Oliver Stone sticks to the surface and buries the provocation.

"Snowden" could have been a character portrait, but instead it's like "The Bourne Identity" minus the chases and fights, which is like a ham and cheese sandwich minus the ham and cheese.

Stone's direction is measured, methodical, and totally lacking in the fire and flamboyance that sometimes electrified and sometimes ruined his earlier films. The story moves along without any real sense of urgency or suspense.