Snowpiercer is based on a French graphic novel about a train that carries all that remains of the world's population on an endless journey through a frozen landscape. We join the freeloaders at the back of the train as they revolt and try to take over the engine at the front.

From the dirt and rags of the windowless carriage at the back of the train the scene changes carriage by carriage. The graphic novel origins show through in the visual humour, the holes in the premise and simplistic characters (particularly the cartoonish villains - Tilda Swinton is Snowpiercer's one redeeming feature).

Unfortunately I didn't care for any of the good guys and their strategy is less than subtle. We have no doubt that the unarmed plebs will get through all the locked doors and defeat the army of guards blocking their way. The repetitive nature of get through a locked door into the next carriage, fight the bad guys, rinse and repeat began to feel like an unchallenging computer game where the main interest is seeing what the next level looks like. In this carefully ordered world each carriage has a purpose and is decorated accordingly. Similarly the occupants of each carriage dress according to their caste and purpose. It is obvious that the people designing the sets and costumes had a lot of fun.

I enjoyed Bong Joon Ho's comedy monster romp, The Host. There are plenty of good movie scenes shot on trains and it is pity Bong Joon Ho wasn't inspired by them.

Snowpiercer may well become a cult film but if like me you loose interest in the heroes, start seeing holes in the plot and see scenes that could be better filmed then you know that the director has lost you. 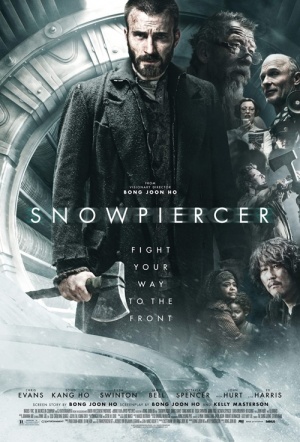