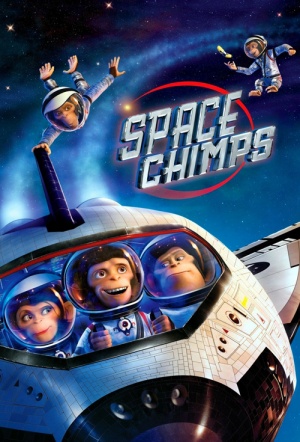 Animated intergalactic adventure is the order of the day as two NASA chimps are launched into the stratosphere. One is Ham III, whose grandfather happens to be the very first chimpanzee ever to travel into space. Unlike his illustrious forefather, Ham III is a goofball, albeit good-natured, and not well suited to the goal of the mission (namely, eliminate a tyrannical leader on a distant planet). Ham III will have to learn the true meaning of heroism if he is to be successful. Fortunately, the brave Lt. Luna and the officious commander Titan are along for the ride and have got his back.

Only a truly dreadful story could make 81 minutes seem like an eternity. And Space Chimps is just that leaden experience.

Kids sense when a movie is being noisy and frantic just to keep them distracted; these apes are overcaffeinated.

If "Wall-E" pushes the boundaries of what can be done in an animated movie, Space Chimps proves that the old formula is still pretty effective when executed well.

The animation, incidentally, is half-a--ed, like they ran out of the $292.96 budget halfway through. Rip-off indeed.

The CG animation is nothing special, but the characters are surprisingly fun and the story is full of enough puns, wordplay and slapstick to elicit laughs from across the age spectrum.

But there's also a bizarre undercurrent of what is essentially sexual harassment by Ham of Luna which seems wildly inappropriate in a film for kids.