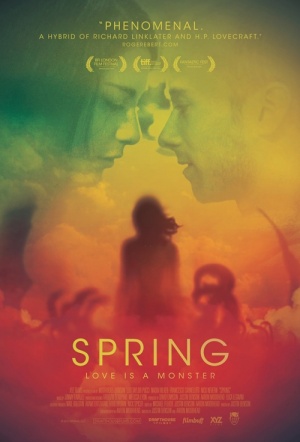 Impulsively boarding a flight to Italk after a personal tragedy, young American Evan (Lou Taylor Pucci) is captivated by a beautiful, intelligent woman. As the two become romantically entangled, the gorgeous stranger's ulterior motives turn out to be far weirder than Evan could have anticipated.

"Co-directors Justin Benson and Aaron Moorhead burst onto the indie horror scene in 2012 with their fantastic debut feature Resolution. This is their second effort and they have quite adeptly avoided the sophomore slump. Spring is an elusive film, never quite what you think it might be; enigmatic in the same way as the woman who captures Evan's attention. From the beautiful and stylish cinematography to the strong lead performances, Spring is a consistently engaging exploration of life, love and the monsters therein." (Fantastic Fest)

It's rare indeed to find a modern horror film more interested in characters than plot or body count, and the naturalistic storytelling pays dividends.

A cousin to Richard Linklater's 'Before Sunrise' trilogy, with little hints of Lynchian unease along the way.

The actors get a chance to create a real relationship, and they make the most of the opportunity.

It's a monster movie with a heart and soul to go alongside its tentacles.

As an experiment in what can be done once you tear down the boundaries of what defines certain genres, Spring is successful.

The storytelling is unfussy but still implies backstory and emotional connections that take a while to become clear.