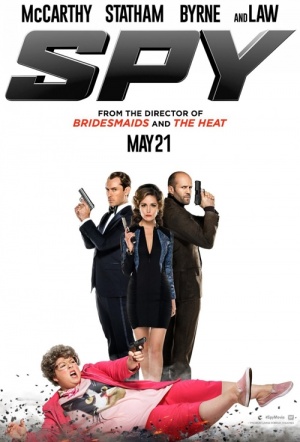 Paul Feig (Bridesmaids) directs and writes this spy-comedy about Susan Cooper (the brilliant Melissa McCarthy) and her misadventures as a secret agent. The supporting cast features Rose Byrne, Jude Law and Jason Statham.

Cooper is an unassuming, deskbound CIA analyst, and the unsung hero behind the Agency’s most dangerous missions. But when her partner (Law) falls off the grid and another top agent (Statham) is compromised, she volunteers to go deep undercover to infiltrate the world of a deadly arms dealer, and prevent a global disaster.

This marks Feig's third teaming with McCarthy, after Bridesmaids and The Heat.

While the rest of the Freaks & Geeks wasted no time taking over Hollywood when the critically-adored TV show was cancelled after one season in 2001, it wasn't until the 2011 megahit Bridesmaids that F&G creator Paul Feig's directorial career really took off.

Spy confirms Feig's and McCarthy's instinct for both the zeitgeist and the funnybone...

The principal scene-stealer turns out to be Australia's Rose Byrne. She delivers a performance composed of a series of small comic gems produced with a minimum of fuss.

Laugh-stuffed and making excellent use of its marquee-grade supporting cast...

There's a sense of witnessing a woman empowered and it's a hoot to see McCarthy given the space she deserves to spread her comic wings.