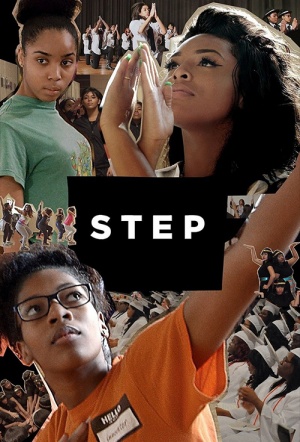 Documentary on a school step dance team on the verge of graduation that won director Amanda Lipitz a Special Jury Award for Inspirational Filmmaking at Sundance.

"Blessin, Cori, Taylor and the 'Lethal Ladies' team at Baltimore Leadership School for Young Women have two goals: get accepted into college and win the Bowie State step competition. A tough ask, as they've been on a losing streak and studies aren't going well. The devoted teachers and no-nonsense coach encourage the girls every which way, but thriving in this low-income community is beyond tough. Lipitz started filming against a backdrop of riots following a black death in custody; racial inequality permeates the lives of these African-American seniors. Despite this, Step proves vibrantly entertaining, not least for the full-on step moves – just check out the Black Lives Matter routine!" (Sydney Film Festival)

Three teenage girls and their mothers and educators open their hearts and lives for director Amanda Lipitz; it's quite a privilege to witness their story.

It seems impossible that someone won't snap up the rights to this uplifting success story and refashion it as a narrative teen pic.