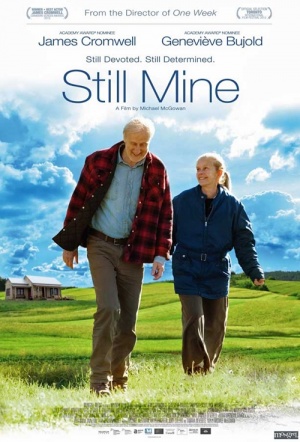 James Cromwell (The Artist) and Geneviève Bujold (Anne of the Thousand Days) star in this Canadian love story as an elderly couple who take on government bureaucracy when the farm home they want to build is met with disapproval from local authorities. Based on true events.

"One of a dwindling number of family farmers in rural St. Martins, New Brunswick, Craig (Cromwell) is used to doing things for himself. Sometimes cantankerous and always stubborn, he’s kept his traditional farm going in a period when industrial agriculture dominates the marketplace. The primary reason he’s been able to do so is his relationship with his wife, Irene (Bujold), who’s as tough and determined as he is. But when her health begins to fail, Craig is faced with the choice of either building a new, more suitable home for her, or leaving the farm they have lived on for decades. A skilled carpenter, he figures the only obstacles he faces are time and the weather. That is, until he meets Rick (Jonathan Potts), a government inspector who makes it his personal mission to halt construction on the new house." (Toronto Film Festival)

If you need a tonal gauge of where Michael McGowan’s Still Mine sits in the scheme of films about old couples withering away: it’s considerably sudsier than fellow Canadian Sarah Polley’s Away From Her, but a lot less grim than Michael Haneke’s Amour.

A David and Goliath story of the geriatric set, Still Mine is a sentimental but thanks to Cromwell's performance an engaging story of love, devotion and determination.

A film built of small, tender moments infused with the tinder-dry wit which still enlivens the Morrisons' conversations.

Morrison’s house like McGowan’s movie is a love letter to resilience.

The lead performances lend poetic nuance to a heartfelt story that tends to pander rather than delve deep.