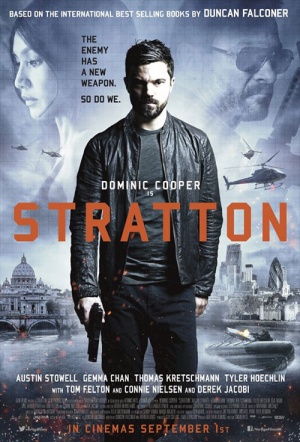 Dominic Cooper is an MI6 operative on the tail of an international terrorist cell in this action thriller directed by Simon West (Con Air).

Stratton (Cooper), a Special Boat Service operative for MI6, and his American counterpart Marty (Tyler Hoechlin, Road to Perdition), scope a laboratory complex in Iran in order to intercept deadly biochemical weapons. But the mission goes spectacularly wrong and in the mayhem Marty is mortally wounded. Back at base Stratton is summoned by his boss who has received intel that a former Soviet operative, Barovski (Thomas Kretschmann, King Kong), has plans to take revenge on his former paymasters by using stolen chemical weapons. From hereon in, Stratton and his team must race against time and stop the unimaginable from happening.

The story feels cobbled together and the dialogue is often painful.

Dominic Cooper is lethally bland in this dull action flop.

What can never be escaped, though, is the utterly formulaic nature of the storytelling.

A padded remake of a James Bond pre-credits sequence (specifically, the one with Pierce Brosnan and the Millennium Dome). If Cooper's Stratton is to stick around, he needs to up his game.