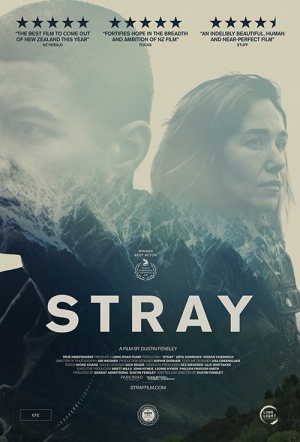 Set in the chilly environments of New Zealand's South Island, this stark drama follows a self-confined man reeling from an act of violence.

"Jack (Kieran Charnock, The Rehearsal), a taciturn young man on parole for grievous bodily harm, holes up in a cabin somewhere in Central Otago. It’s not clear whether he’s trying to forget the past or reconcile with it, although his hesitancy with locals suggests he’s much closer to the scene of the crime than he’d care to admit. Locked away in a prison of his own making, Jack one evening encounters Grace, very far from home and seeking refuge. Played by the captivating Arta Dobroshi, star of the Dardenne brothers’ Lorna’s Silence, Grace’s own private struggles linger beneath her attraction to Jack. These lonely, enigmatic strangers drift into a relationship that promises to either heal or hurt." (New Zealand International Film Festival)

As well as breaking a local crowd-funding record, Stray became the first New Zealand film to be selected to play at the prestigious Moscow International Film Festival. Better yet, Charnock won Best Actor.

With an unmatched synthesis of attentive direction and rigorous aesthetic intent, Stray fortifies hope in the breadth and ambition of New Zealand film. Set during a permeating southern winter, the film follows tortured strangers Jack (Kiernan Charnock) and Grace (Arta Dobroshi) recalibrating their lives in the mountains of remote Central Otago. In this exquisite debut from writer/director Dustin Feneley, the two find themselves in a charged, intricate intimacy.

You can put Stray up with the very best films ever made in New Zealand, and pencil it into your top-ten of 2018 already.

It is an iceberg of a film - what appears above the surface barely scratches at the behemoth of emotion lurking within.