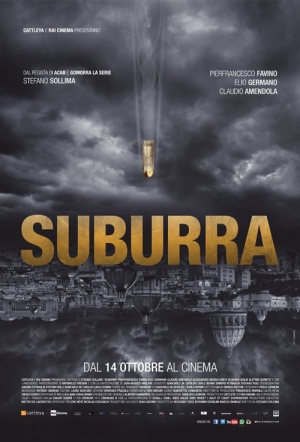 Italian gangster saga about local mob bosses who agree to turn the waterfront of Rome into a new Las Vegas, but peace is not to last long. Features a score by M83.

"Sollima uses Rome and one of its suburbs (Ostia) as the 'Eternal City' for greed and violence: a dangerous battleground where politicians, different generations of Mafiosi (the old guard who want some kind of order versus the restless young ones) and even the Vatican want their share.

"Suburra is a fizzing, energetic, Scorsesian depiction of a corrupted system, which at the same time feels like a series squeezed into a film with its many characters, twists and 'chapters' (the film takes place one week before the 'apocalypse'). The logical next step: Suburra is being adapted as a series for Netflix in 2017, the first original Italian content shot for that provider." (Rotterdam Film Festival)

Ah, bella Italia! Where men are men, politicians are corrupt, mafiosi are everywhere and women are either hookers or molls.

It's carried off with a great deal of flair.

Sollima’s command of atmosphere and pace really impresses: the torrential rain, far from washing Rome clean, begins to suffocate it.

A stylish crime thriller that dissects Italian society with a cool eye and an itchy trigger finger.