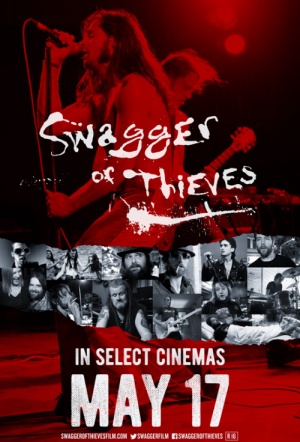 Julian Boshier's all-access portrait of New Zealand rock institution Head Like a Hole, following Nigel 'Booga' Beazley and Nigel Regan at home, on the road and in full roar.

"Swagger of Thieves director Julian Boshier has worked for half a decade on this film. Sometime during that marathon of bloody-minded perseverance, he has earned the trust and respect of Nigel ‘Booga’ Beazley and Nigel Regan, the ever-collapsing binary stars who are the guts of any HLAH line up. Boshier finds the two men staring down the age with belligerence, vulnerability, shamelessness and honesty. There is no legacy polishing here, and no one’s feelings are spared." (New Zealand International Film Festival)

Julian Boshier’s intimate doco on Head Like a Hole sensibly avoids turning in a chronological recounting of the band’s inglorious past, if glorious cacophony. Swagger of Thieves captures what it means to be a band with a rep in NZ, juggling notoriety and nostalgia in the present day alongside a feeling of “we fucked things up a bit, but how come we didn’t get what we deserve?”. Unrelentingly honest, the film contains some of Aotearoa’s most insightful moments of career reflection - for instance, seemingly embittered APRA royalty analysis (while washing windows, no less) rings incredibly true to life on screen.

It is a stunning achievement. Go see it.

Artfully told with clever switches between black-and-white and colour and judicious use of archival footage of the Hole in their pomp...

Swagger of Thieves is a tragically engrossing doco to watch.

Old fans should lap it up.