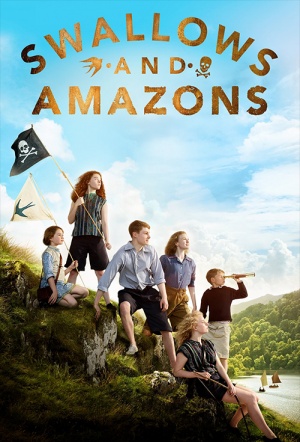 Four plucky kids escape a housebound Lake District summer holiday and set off on an adventure in this new adaptation of a British classic.

“The four Walker children have finally convinced their parents to let them set off on their own for a sailing adventure during summer vacation. Their summer of freedom quickly turns into a fierce turf war when they learn their island camp has been claimed by the boisterous Amazons, and find themselves caught in the midst of some nefarious international intrigue that’s landed in their sleepy byways.” (New York International Children's Film Festival)

It makes for a charmingly old-fashioned family adventure – one that you can imagine several generations of a family gathering to watch on a rainy grey Sunday afternoon.

A large part of the reason you buy into it so breezily is that the young leads clearly do too.

A good-natured, if self-conscious period adaptation that grafts on a new grownup plotline of treachery and derring-do, probably closer to Enid Blyton’s Famous Five or John Buchan.

For a film industry determined to open itself to a diversity of voices, this is very much a safe, back-to-basics play for British audiences in need of some comfort food.

No amount of espionage exploits can supercharge the japes and scrapes with excitement that warrant its place on the big screen.