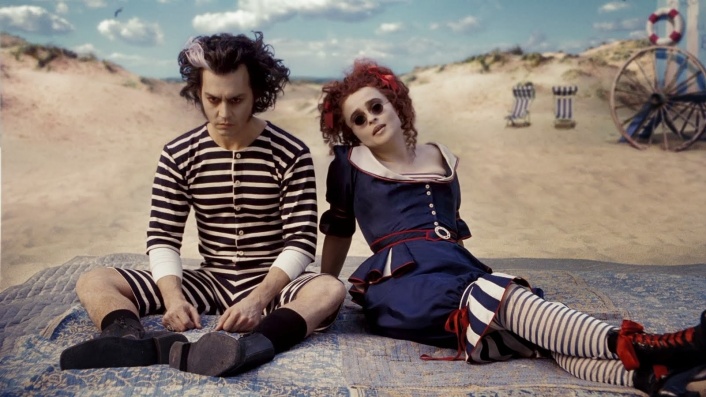 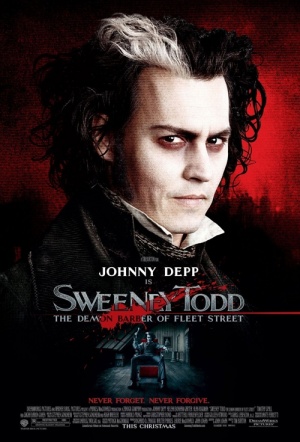 Johnny Depp and Tim Burton join forces again in a big-screen adaptation of Stephen Sondheim's award-winning musical thriller. Depp stars in the title role as a man unjustly sent to prison who vows revenge. When he returns to reopen his barber shop, Sweeney Todd becomes the Demon Barber of Fleet Street who "shaved the heads of gentlemen who never thereafter were heard from again."

Tim Burton, master of the gothic fairytale, brings us this fiendish love story of a demonic barber's bloodlust. As an adaptation of the popular Broadway musical, Sweeney Todd is a fine example of the genre, meshing music with mayhem to create Burton's most accomplished work in an illustrious career.

Where much could have gone wrong, things have turned out uniformly right thanks to highly focused direction by Tim Burton, expert screw-tightening by scenarist John Logan, and haunted and musically adept lead performances from Johnny Depp and Helena Bonham Carter.

Sweeney is a bloody wonder, intimate and epic, horrific and heart-rending as it flies on the wings of Sondheim's most thunderously exciting score. Burton is a true visionary.

The result is bloody wonderful - and just plain bloody. So far as Broadway-to-screen adaptations go, this isn't a puff of Hairspray, but a gush of arterial. So be warned, when Depp's dastardly barber goes in for the cut, director Burton doesn't...

It's not entirely surprising that Burton's Sweeney Todd feels heavier on style than on substance -- so much that the style almost subverts the story. Still, it's a gorgeous artifact and pretty enjoyable in all.

Whether horror fans are ready for high-notes or musical buffs will appreciate Dario Argento levels of gore is an open question, but this is a rich, demented experience.

While at times the triteness of the music grates, Sweeney Todd is Burton back to his gruesome best, offering more nightmares to an already impressive collection. I haven't shaved since.

From the moment those first doomy organ chords shake the theatre, it's clear that Sweeney Todd is no ordinary movie musical. Tim Burton's film, his best for a good while, is an eye-popping feast of gore underscored with disturbing, dissonant ballads.