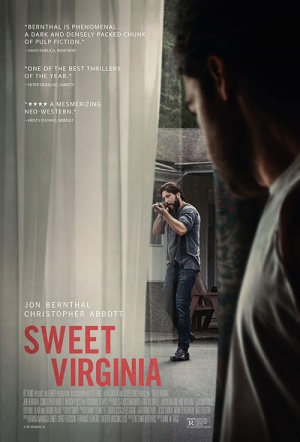 "A burglary-homicide rattles the residents of a small Alaska town, in particular two women made widows by the crime and their mutual friend, Sam, the proprietor of the local motor lodge. Sam is an outsider himself, a former rodeo champ all too happy to leave the jolt and violence of the ring behind. So when his guests prove unruly or a stranger reaches out to him, reluctance is his natural response. Secrets are revealed, violence increases, and the people in town act more unhinged. His hesitancy — and his willingness to move past it — becomes the lynchpin for his survival." (Tribeca Film Festival)

A twisty, small-town thriller that blooms in the shadows and shies from the light, "Sweet Virginia" marshals a relentlessly threatening mood from dangerous secrets and unpleasant surprises.

...the movie is driven less by action than by the expertly paced buildup of pervasive unease among friends and family of the deceased.

The cast and creators of "Sweet Virginia" dig underneath flat pulp conventions and find the real pain and emotional instability at their roots.

This taut drama exists in a timeless noir territory, a world of free-floating dread and dashed hopes where mood supersedes specifics of time and place.

If you need a strong narrative engine, look elsewhere.